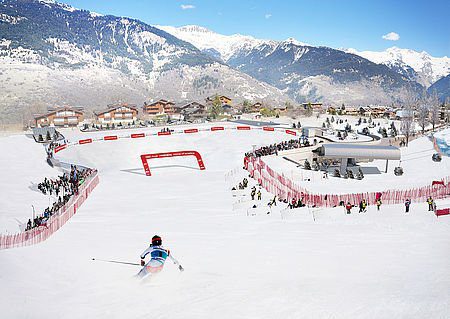 Already well-established as being great for families, La Tania is making sure that no-one would consider learning to ski in any other resort!

The La Tania snow front is undergoing a transformation which will deliver not one but two ‘magic carpet’ style escalators which will both be free to use and are aimed at helping beginner skiers to find their feet before heading up on the main La Tania gondola.

These two short runs will be protected from more experienced skiers and snowboarders who use the main Folyères thoroughfare to access the gondola or ski into the village. The drag lift Troika has been removed. This new area will be great for families and groups with new skiers visiting La Tania.

At the other end of the spectrum, the new black run in Courchevel, ‘Eclipse’ has been created for the Alpine Skiing World Championships in 2023, but the good news is you don’t have to qualify as a national champion to try it out this winter!

Located above Le Praz, you’ll have to steady your nerves for this 3200m long slope which averages 30% gradient, as the 940m vertical descent will require some stamina, but it’s all worth it as you whizz over the finish line, victorious, in the beautiful village of Le Praz which is home to some fab places for a beer or a vin chaud!

The chef from Le Farcon, Julien Machet, has opened a bistro-style restaurant in La Tania in what was the Chrome Bar. Last winter it opened with a takeaway service, offering classic French casserole style meals for visitors to heat up in their accommodation and this year it will open its doors to diners at lunchtimes between 12-2pm, and from 7pm in the evenings. The children’s menu is reasonable at €12 and a daily special casserole ‘La Cocotte du Jour’ is €14.